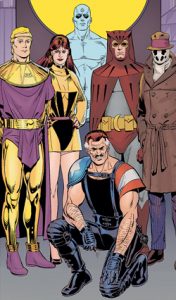 The main cast of characters

Watchmen is a twelve-issue comic book limited series created by writer Alan Moore, artist Dave Gibbons, and colourist John Higgins. The series was published by DC Comics during 1986 and 1987, and has been subsequently reprinted in collected form. Watchmen originated from a story proposal Moore submitted to DC featuring superhero characters that the company had acquired from Charlton Comics. As Moore’s proposed story would have left many of the characters unusable for future stories, managing editor Dick Giordano convinced the writer to create original characters instead.

Moore used the story as a means to reflect contemporary anxieties and to critique the superhero concept. Watchmen depicts an alternate history where superheroes emerged in the 1940s and 1960s, helping the United States to win the Vietnam War. The country is edging towards a nuclear war with the Soviet Union, freelance costumed vigilantes have been outlawed and most former superheroes are in retirement or working for the government. The story focuses on the personal development and struggles of the protagonists as an investigation into the murder of a government sponsored superhero pulls them out of retirement, and eventually leads them to confront a plot that would stave off nuclear war by killing millions of people.

The initial premise for the series was to examine what superheroes would be like “in a credible, real world”. As the story became more complex, Moore said Watchmen became about “power and about the idea of the superman manifest within society.” The title of the series refers to the question “Who watches the watchmen?”, although Moore said in a 1986 interview with Amazing Heroes he did not know where that sentence originated. After reading the interview, author Harlan Ellison informed Moore that the sentence is a translation of the question “Quis custodiet ipsos custodes?”, posed by the Roman satirist Juvenal. Moore commented in 1987, “In the context of Watchmen, that fits. ‘They’re watching out for us, who’s watching out for them?'” The writer stated in the introduction to the Graphitti hardcover of Watchmen that while writing the series he was able to purge himself of his nostalgia for superheroes, and instead he found an interest in real human beings.

Creatively, the focus of Watchmen is on its structure. Gibbons used a nine-panel grid layout throughout the series and added recurring symbols such as a blood-stained smiley. All but the last issue feature supplemental fictional documents that add to the series’ backstory, and the narrative is intertwined with that of another story, a fictional pirate comic titled Tales of the Black Freighter, which one of the characters reads. Structured as a nonlinear narrative, the story skips through space, time and plot. Watchmen has received critical acclaim both in the comics and mainstream press, and is regarded by critics as a seminal text of the comics medium. After a number of attempts to adapt the series into a feature film, director Zack Snyder’s Watchmen was released in 2009. 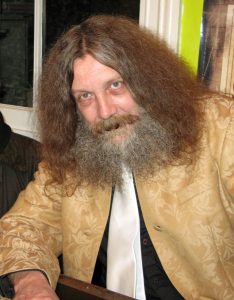 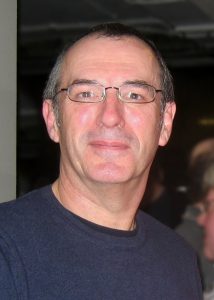 Alan Moore and Dave Gibbons, the writer and the artist of “Watchmen”

Watchmen is set in an alternate reality which closely mirrors the contemporary world of the 1980s. The primary difference is the presence of superheroes. The point of divergence occurs in the year 1938. Their existence in this version of America is shown to have dramatically affected and altered the outcomes of real-world events such as the Vietnam War and the presidency of Richard Nixon. In keeping with the realism of the series, although the costumed crimefighters of Watchmen are commonly called “superheroes”, the only character who possesses obvious superhuman powers is Doctor Manhattan. The existence of Doctor Manhattan has given the U.S. a strategic advantage over the Soviet Union, which has increased tensions between the two nations. Eventually, superheroes grow unpopular among the police and the public, which has led to the passage of legislation in 1977 to outlaw them. While many of the heroes retired, Doctor Manhattan and The Comedian operate as government-sanctioned agents, and Rorschach continues to operate outside the law. 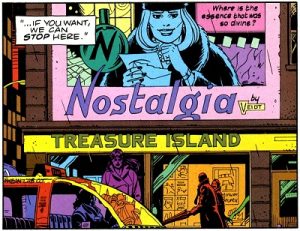 In October 1985, New York City police are investigating the murder of Edward Blake. With the police having no leads, costumed vigilante Rorschach decides to probe further. Discovering Blake to be the face behind The Comedian, a costumed hero employed by the United States government, Rorschach believes he has discovered a plot to terminate costumed adventurers and sets about warning four of his retired comrades: Dan Dreiberg (formerly the second Nite Owl), the superpowered and emotionally detached Doctor Manhattan and his lover Laurie Juspeczyk (the second Silk Spectre), and Adrian Veidt (once the hero Ozymandias, and now a successful businessman).

After Blake’s funeral, Doctor Manhattan is accused on national television of being the cause of cancer in friends and former colleagues. When the U.S. government takes the accusations seriously, Manhattan exiles himself to Mars. In doing so, he throws humanity into political turmoil, with the Soviet Union invading Afghanistan to capitalize on the perceived American weakness. Rorschach’s paranoid beliefs appear vindicated when Adrian Veidt narrowly survives an assassination attempt, and Rorschach himself is framed for murdering Moloch, a former supervillain.

Neglected in her relationship with Manhattan, and no longer kept on retainer by the government, Juspeczyk stays with Dreiberg; they don their costumes and resume 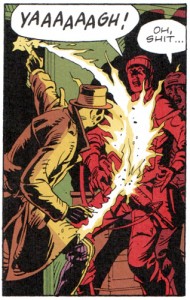 vigilante work as they grow closer together. With Dreiberg starting to believe some aspects of Rorschach’s conspiracy theory, the pair take it upon themselves to break him out of prison. Doctor Manhattan, after looking back on his own personal history, places the fate of his involvement with human affairs in Juspeczyk’s hands. He teleports her to Mars to make the case for emotional investment. During the course of the argument, Juspeczyk is forced to come to terms with the fact that Blake, who once attempted to rape her mother, was in fact her biological father following a second, consensual relationship. This discovery, reflecting the complexity of human emotions and relationships, re-sparks Doctor Manhattan’s interest in humanity.

On Earth, Nite Owl and Rorschach continue to uncover the conspiracy surrounding the death of The Comedian and the accusations that drove Doctor Manhattan into exile. They discover evidence that Adrian Veidt may be behind the plan. Rorschach writes his suspicions about Veidt in his journal, and mails it to New Frontiersman, a small, right-wing newspaper in New York. The pair then confront Veidt at his Antarctic retreat. Veidt explains his underlying plan is to save humanity from impending Atomic war between the United States and Soviet Union by faking an alien invasion in New York City, which will annihilate half the city’s population. He hopes this will unite the nations against a perceived common enemy. He also reveals that he had murdered The Comedian, arranged for Dr. Manhattan’s past associates to contract cancer, staged the attempt on his own life in order to place himself above suspicion, and eventually staged Moloch’s death to frame Rorschach. This was all done in an attempt to prevent his plan from being exposed. Finding his logic callous and abhorrent, Dreiberg and Rorschach attempt to stop him but discover that Veidt had already enacted his plan.

When Doctor Manhattan and Juspeczyk arrive back on Earth, they are confronted by mass destruction and wide scale death in New York City. Doctor Manhattan notices his abilities are limited by tachyons emanating from the Antarctic, and the pair teleport there. They discover Veidt’s involvement and confront him. Veidt shows everyone news broadcasts confirming the cessation of global hostilities and cooperation against a new threat; this leads almost all present to agree that concealing Veidt’s truth from the public is in the best interests of the world to keep it united. Rorschach refuses to compromise and leaves, intent on revealing the truth. As he is making his way back, he is confronted by Manhattan. Rorschach tells him that Manhattan will have to kill him to stop him from exposing Veidt and his actions, and Manhattan responds by vaporizing him. Manhattan then wanders through the base and finds Veidt, who asks Manhattan if he did the right thing in the end. In response, Manhattan states that “Nothing ever ends” before leaving the Earth for a different galaxy. Dreiberg and Juspeczyk go into hiding under new identities and continue their romance. Back in New York, the editor at New Frontiersman complains about having to pull a two page column about Russia due to the new political climate. He asks his assistant to find some filler material from the crank file, a collection of rejected submissions to the paper, many of which had not even been reviewed. The series ends with the young man reaching towards the pile of discarded submissions, near the top of which is Rorschach’s journal. 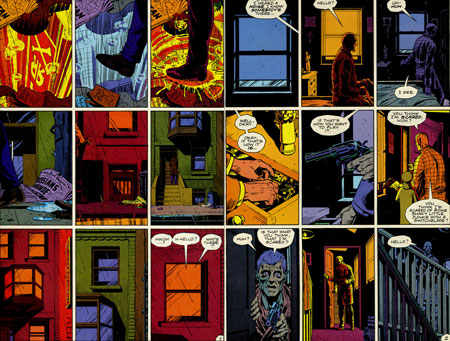 A sample panel from the comic series.

Tales Of The Black Freighter 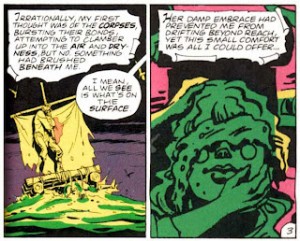 Watchmen features a story within a story in the form of Tales of the Black Freighter, a fictional comic book from which scenes appear in issues three, five, eight, ten and eleven. The fictional comic’s story, “Marooned”, is read by a youth in New York City. Moore and Gibbons conceived a pirate comic because they reasoned that since the characters of Watchmen experience superheroes in real life, “they probably wouldn’t be at all interested in superhero comics.” Gibbons suggested a pirate theme, and Moore agreed in part because he is “a big Bertolt Brecht fan”: the Black Freighter alludes to the song “Seeräuberjenny” (“Pirate Jenny”) from Brecht’s Threepenny Opera. Moore theorized that since superheroes existed, and existed as “objects of fear, loathing, and scorn, the main superheroes quickly fell out of popularity in comic books, as we suggest. Mainly, genres like horror, science fiction, and piracy, particularly piracy, became prominent—with EC riding the crest of the wave.” Moore felt that “the imagery of the whole pirate genre is so rich and dark that it provided a perfect counterpoint to the contemporary world of Watchmen”. The writer expanded upon the premise so that its presentation in the story would add subtext and allegory. The supplemental article detailing the fictional history of Tales of the Black Freighter at the end of issue five credits real-life artist Joe Orlando as a major contributor to the series. Moore chose Orlando because he felt that if pirate stories were popular in the Watchmen universe that DC editor Julius Schwartz might have tried to lure the artist over to the company to draw a pirate comic book. Orlando contributed a drawing designed as if it were a page from the fake title to the supplemental piece.

In “Marooned”, a young mariner (called “The Sea Captain”) journeys to warn his home town of the coming of the Black Freighter, after he survives the destruction of his own ship. He uses the bodies of his dead shipmates as a make-shift raft. When he finally returns home, believing it to be already under the occupation of the Black Freighter’s crew, he kills an innocent couple and then attacks his own wife in their darkened home, mistaking her for a pirate. After realizing what he has done, he returns to the sea shore, where he finds that the Black Freighter has not come to claim the town; it has come to claim him. He swims out to sea and climbs aboard the ship. According to Richard Reynold, the mariner is “forced by the urgency of his mission to shed one inhibition after another.” Just like Adrian Veidt, he “hopes to stave off disaster by using the dead bodies of his former comrades as a means of reaching his goal”. Moore stated that the story of The Black Freighter ends up specifically describing “the story of Adrian Veidt” and that it can also be used as a counterpoint to other parts of the story, such as Rorschach’s capture and Dr. Manhattan’s self-exile on Mars. 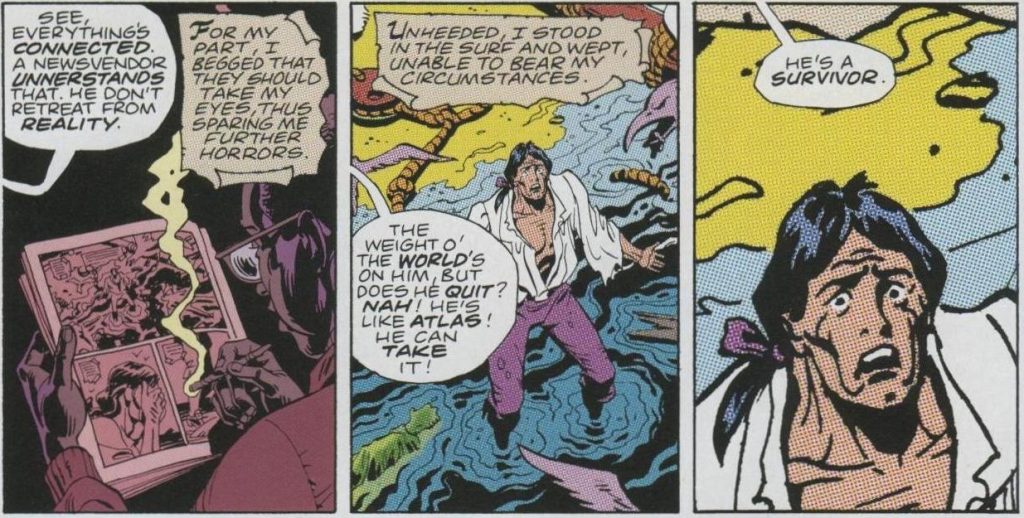 The Story Within A Story