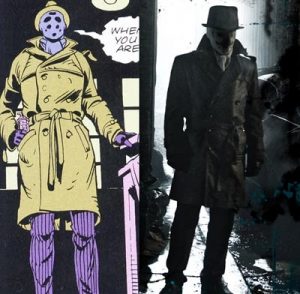 Rorschach is a noir private detective-themed vigilante who wears a white mask with constantly shifting ink blots, Rorschach continues to fight crime in spite of his outlaw status, eventually making the FBI’s Ten Most Wanted List. He was born Walter Joseph Kovacs, the son of a prostitute by a man whose last name his mother never bothered to learn, and spent much of his childhood in a home for troubled youth; later he worked in the garment industry. After reading about the murder of Kitty Genovese and the reported complete indifference of the witnesses of the crime, he modified a special fabric that she had ordered to create a mask and became a vigilante, eventually forming a productive partnership with Nite Owl II. In 1975, after failing to rescue a young girl, he lost all faith in humanity and began to embrace extremist right-wing ideology.

Like most characters in Watchmen, Rorschach has no obvious “super powers”. He merely has his will, physical strength, and skills. Rorschach is extremely resourceful, adapting ordinary household objects into tools or weapons, such as pepper to blind a police officer and the use of hairspray in combination with a match to set fire to another police officer, during a confrontation at Moloch’s house. During the series he is shown to use cooking fat, a toilet bowl, a cigarette, a fork and his jacket all as weapons; he is also shown using a coat hanger as a makeshift measuring device. He owns a gas-powered grappling gun, which he uses to climb buildings (and once as a makeshift harpoon gun against a police officer), as seen in Chapter 1, which was designed and built by Nite Owl II.Rorschach is well versed in street combat, gymnastics, and boxing.

Despite his mental instability, Rorschach was described as “tactically brilliant, and unpredictable” by Nite Owl, and possesses surprisingly good detective skills, as displayed when he is able to locate the Comedian’s costume in his apartment when the police could not.

He is also skilled at Lock Picking, where a running gag throughout the series is him breaking into Nite Owl’s home to talk to him.

In the Watchmen film he is played by Jackie Earle Haley. 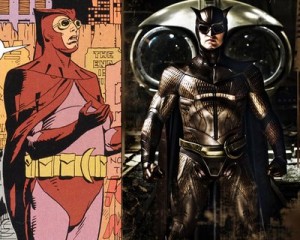 Nite Owl II (Daniel Dreiberg) is a superhero who uses owl-themed gadgets, in a manner which led Dave Gibbons to consider him “an obsessive hobbyist… a comics fan, a fanboy.” Dan Drreiberg took the role of “Nite Owl” from an earlier adventurer, the retired crime fighter Hollis Mason.

Nite Owl’s modus operandi has a lot in common with the DC Comics character Batman. The second Nite Owl is another Crimebusters vigilante who has not revealed his identity in the post-Keene Act era throughout the novel.

Dreiberg’s father was a banker who left him a large inheritance, which he used to design and build his crime-fighting gear. Hollis Mason, the original Nite Owl, was his hero and when he retired, Dan wrote to Mason, asking if he could carry on his name. Upon looking at his gear, Mason was too impressed to refuse him, so Dan started out in the 1960s. From then on, the two men became friends, and met every Saturday.

In 1965, Dreiberg (as Nite Owl) successfully debuted and teamed up with fellow costumed adventurer Rorschach to take on organized crime. Later on he became a member of the Crimebusters. Having already come to believe that his expensive activities were accomplishing little, Dreiberg retired after the passing of the Keene Act on August 3, 1977, although in 1985 (when the story takes place) he seems to regret his decision. Rorschach would later say regarding his retirement, “No staying power.” When not fighting crime, Dreiberg mastered in aeronautics and zoology at Harvard University, contributing scholarly articles to ornithological journals after his retirement in 1977.

In the Watchmen film he is played by Patrick Wilson, who put on 25 pounds (11 kg) in between the filming of his flashback scenes and the 1985 scenes, showing the physical decline of his character. 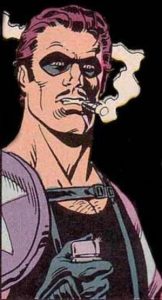 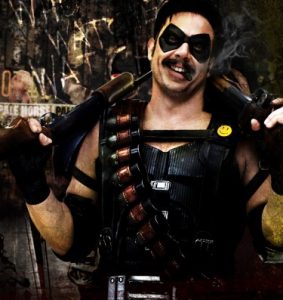 He is one of the only masked adventurers to be a member of both the Minutemen and the Crimebusters, and had been active for forty-five years through the aid of government sponsored activities and the press conjuring him into a patriotic symbol of war and victory. He is a cigar-chomping, gun-toting vigilante-turned-paramilitary agent. He has shown himself to be a nihilist with little regard for morality or human life. He describes the world as a sadistic joke only he understands. As such, Blake could easily be described as a sociopath, that is to say, a sufferer of Antisocial personality disorder. The Comedian believes that humans are savage in nature, and that civilization can never be more than an idea. He therefore chooses to become a mockery of society, fighting and killing without reservation.

Blake’s murder, which takes place shortly before the story begins in 1985, sets the plot of Watchmen in motion. The character appears throughout the story in flashbacks and aspects of his personality are revealed by other characters. Richard Reynolds described The Comedian as “ruthless, cynical, and nihilistic, and yet capable of deeper insights than the others into the role of the costumed hero”. Nicholas Michael Grant said the Comedian is “the only character in the Watchmen universe who is almost totally unlikeable.”

In the Watchmen film he is played by Jeffrey Dean Morgan. 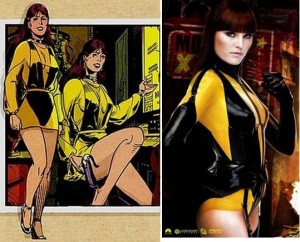 Laurie Juspeczyk (Silk Spectre II) is the daughter of Sally Jupiter, the first Silk Spectre. Laurie’s mother apparently wanted her to follow in her footsteps and so she fought crime for ten years before the Keene Act banned vigilantes.

Laurie is kept on retainer by the government because of her relationship with Doctor Manhattan and lives on a government base at the beginning of the comic. When Doctor Manhattan leaves Earth, the government has her removed from the base and suspends her expense account, forcing her to move in with Dan, with whom she starts a romantic relationship. At the end of the eighth issue, Doctor Manhattan appears and takes her to Mars because he knows she wants to convince him to save the world. On Mars, she realizes that The Comedian was her biological father. After the final encounter with Veidt at the end of the series, she assumes the identity of Sandra Hollis and continues her relationship with Dan.

In the Watchmen film she is played by Malin Åkerman. 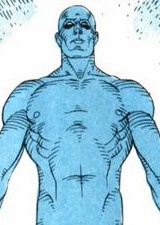 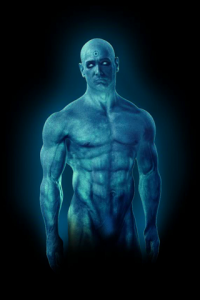 Dr. Jonathan “Jon” Osterman is a physicist who was transformed into a blue-skinned god-like being after he was disintegrated in an Intrinsic Field Subtractor in 1959. He had returned to the chamber to retrieve his girlfriend’s watch (which he had repaired), and was accidentally locked inside when the Subtractor started automatically. Jon was blown into atoms, with nothing left of his body. Within a few months, his disembodied consciousness managed to reconstruct a physical body for itself. Following his reanimation, he is immediately pressed into service by the United States government, which gives him the name Doctor Manhattan, after the Manhattan Project. He is the only character in the story that possesses actual superpowers.[6] Though he dabbles briefly in crime-fighting, his greatest influence is to grant the U.S. a strategic advantage over the Soviet Union during the Cold War, with his most significant action taking place after he is personally asked by President Richard Nixon to intervene in the Vietnam War, leading to an unqualified victory for the U.S. with the defeat of North Vietnam and the Vietcong, preventing the collapse of the Saigon government. Since he works for the U.S. government, he is exempt from the provisions of the Keene Act, but spends much of his time doing advanced technology research and development, and physics research. He is single-handedly responsible for the shift to electric-powered vehicles (by synthesizing the needed elements and chemicals himself) and Veidt credits him with causing a huge leap forward in myriad areas of science and technology. As a result, the technology of the alternative 1985 of the Watchmen universe is far more advanced. After the death of his father in 1969, he does not conceal his birth name and is referenced as “Jon” or “Dr. Osterman”.

The only real “Super Hero” in Watchmen, his powers include superhuman strength, telekinesis, teleportation, control over matter at a subatomic level, and near-total clairvoyance. He perceives the past, present and future as happening simultaneously, but states that he cannot act on that knowledge since his own actions and reactions to events (as is reality itself) are predetermined.

In the Watchmen film, Doctor Manhattan is a CGI character modeled after
Greg Plitt with voice, motion capture, and facial performance provided by Billy Crudup. 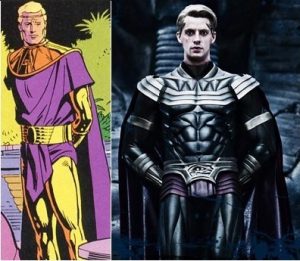 Ozymandias (Adrian Veidt) was a former superhero who is drawing inspiration from his hero Alexander the Great and the Egyptian pharaoh Ramesses II, for whom he is named. He inherited a fortune, but gave it away to see if he could be a success by himself. Ozymandias traced Alexander’s path himself. At the start of Watchmen he has retired to devote his attention to the running of his own enterprises.

Veidt is believed to be the smartest man on the planet, even capable of outsmarting Dr. Manhattan. His combination of intelligence and highly advanced fighting skills makes him perhaps the most feared and dangerous of the mortal vigilantes. He was even able to catch a bullet fired at him. He is often accompanied by his genetically-engineered lynx, Bubastis.

A world-class athlete, he does acrobatic performances in aid of charity events, performing excellently despite being in his mid-forties. Except for Doctor Manhattan, Ozymandias was easily the most dangerous of the crimefighters in that era.

In the Watchmen film he is played by Matthew Goode.