Releases of the comic book

Watchmen, created by writer Alan Moore and artist Dave Gibbons, was first published as a 12-issue miniseries from DC Comics, cover-dated September 1986 to October 1987. It was subsequently collected in 1987 as a DC Comics trade paperback graphic novel that has had at least 22 printings as of September 2008; as well, a trade paperback was published by Warner Books, a DC sister company, in 1987.

The 12 original issues of Watchmen.

In February 1988, DC published a limited-edition, slipcased hardcover volume, produced by Graphitti Design, that contained 48 pages of bonus material, including the original proposal and concept art. In 2005, DC releasedAbsolute Watchmen, an oversized slipcased hardcover edition of the series in DC’s Absolute Edition format. Assembled under the supervision of Dave Gibbons, Absolute Watchmen included the Graphitti materials, as well as restored and recolored art by John Higgins. That December DC published a new printing of Watchmen issue #1 at the original 1986 cover price of $1.50 as part of its “Millennium Edition” line. 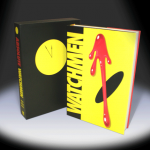 The Deluxe Hardcover edition of the collected volumes.

Home media releases of the film

Tales of the Black Freighter, a fictional comic within the Watchmen limited series, was adapted as a direct-to-video animated feature from Warner Premiere and Warner Bros. Animation, and released on March 24, 2009. It was originally included in the Watchmen script, but was changed from live-action footage to animation because of the $20 million it would have cost to film it in the stylized manner of 300 that Snyder wanted; this animated version, originally intended to be included in the final cut, was then cut because the film was already approaching a three-hour running time. 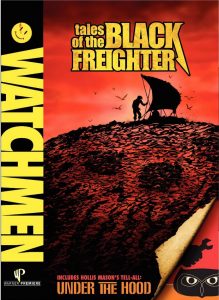 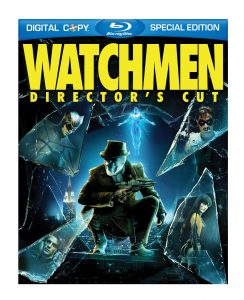 The Blu Ray Cover of the Director’s cut

The Tales of the Black Freighter DVD also includes Under the Hood, a fictional in-universe documentary detailing the characters’ backstories, which takes its title from that of Hollis Mason’s memoirs in the comic book.Under the Hood is rated PG because it’s meant to resemble a behind-the-scenes television news magazine profile of the characters.

The film was released on DVD and Blu-ray on July 21, 2009. The Blu-ray version contains “Maximum Movie Mode”, which plays the movie along with a video presentation by director Zack Snyder, and includes behind-the-scenes footage, comic comparisons, trivia, and more. While the DVD version does not contain this mode, it includes most of the behind-the-scenes footage in separate featurettes. Both versions also include several documentary shorts as well as a music video by the band “My Chemical Romance.

In November 2009, an “Ultimate Collector’s Edition” was released. This version included the director’s cut of the film re-edited to contain Tales of the Black Freighter into the story as it is featured in the graphic novel, bringing the run time of the film to 215 minutes. Additional extras include new commentaries by Zack Snyder and Dave Gibbons, the complete Watchmen: Motion Comic, and over 3 hours of bonus content including Under the Hood, which was previously released on the Tales of the Black Freighter DVD. A special Blu-ray included the director’s cut of Watchmen along with both parts of the game Watchmen: The End is Nigh for PlayStation 3.

The Contents of the special ultimate edition deluxe set

Watchmen: The End Is Nigh is an episodic video game series that serves as a prequel to the film. The game was originally announced for release in downloadable installments on Microsoft Windows, PlayStation Network, and Xbox Live Arcade, with the first one released on March 4, 2009 and the second one on July 30, 2009. 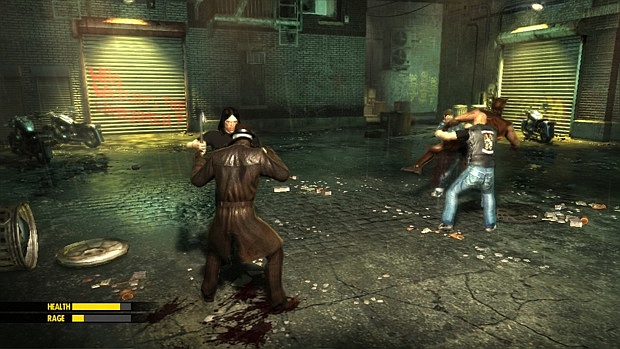 A screenshot from the video game

Both episodes were released together on disc on July 21, 2009 for Xbox 360 and PlayStation 3. A limited edition of the PlayStation 3 version was released billed as “The Complete Experience”, which also included the extended Director’s Cut version of the film in Blu-ray format.

The game allows players to take on the roles of either Rorschach or Nite Owl in single player or cooperative multiplayer. Rorschach and Nite Owl are the only playable characters. Cutscenes that look like animated comic panels bookend each chapter. Two of the film’s actors, Patrick Wilson and Jackie Earle Haley, provide their voices for their characters Nite Owl and Rorschach, respectively. The game features a mix of beat-em-up and puzzle gameplay, with the two characters having different strengths and abilities. Rorschach is faster with unconventional attacks and makes use of improvised weapons like crowbars and baseball bats; Nite Owl is slower but has a solid martial arts method and uses technological devices, such as “screecher bombs”, and the grappling gun. The characters must work cooperatively to pass puzzles and defeat enemies.

The End Is Nigh serves as a prequel to the film and takes place when Rorschach and Nite Owl were crime-fighting vigilantes before they were outlawed in 1977.

In Part 1,  Nite Owl and Rorschach make their way to Sing Sing prison to help quell the rioting that has erupted there and end up involved in a complex political intrigue.

In Part 2, Rorschach sets on the trail of a missing girl named Violet Greene. With a reluctant Nite Owl in tow, they infiltrate a seedy strip club, where they discover that the kidnapper is the Twilight Lady, an old flame of Nite Owl’s.